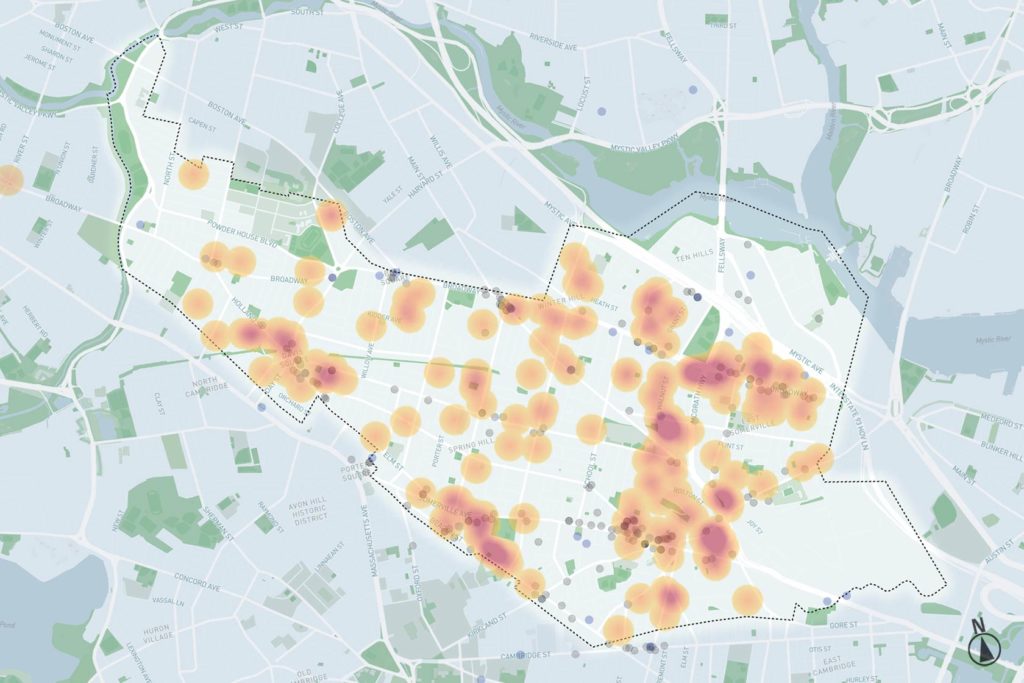 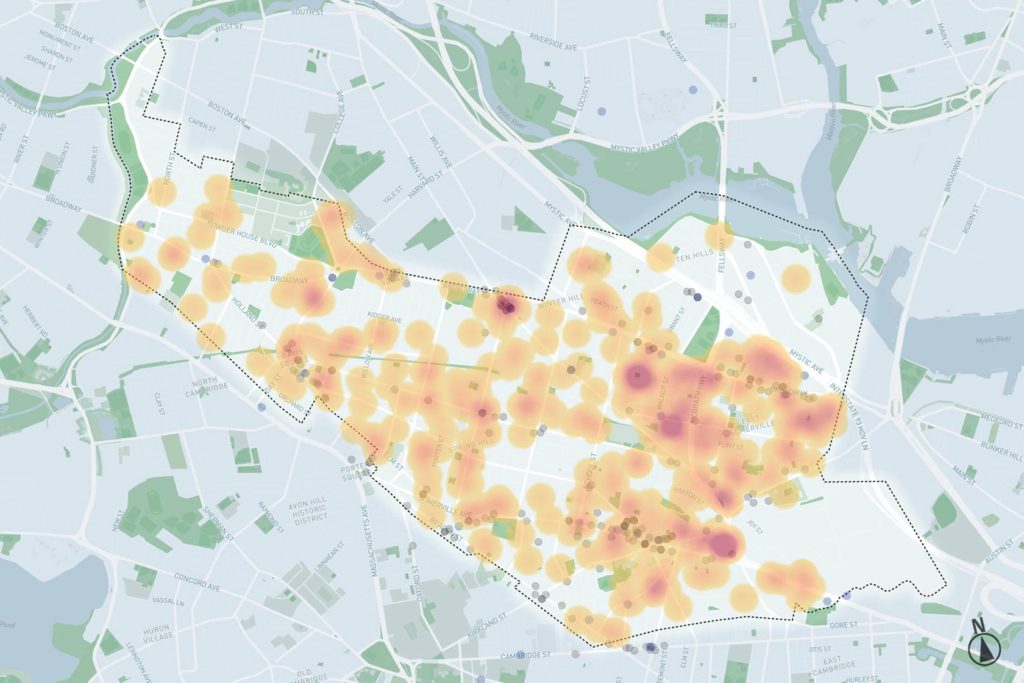 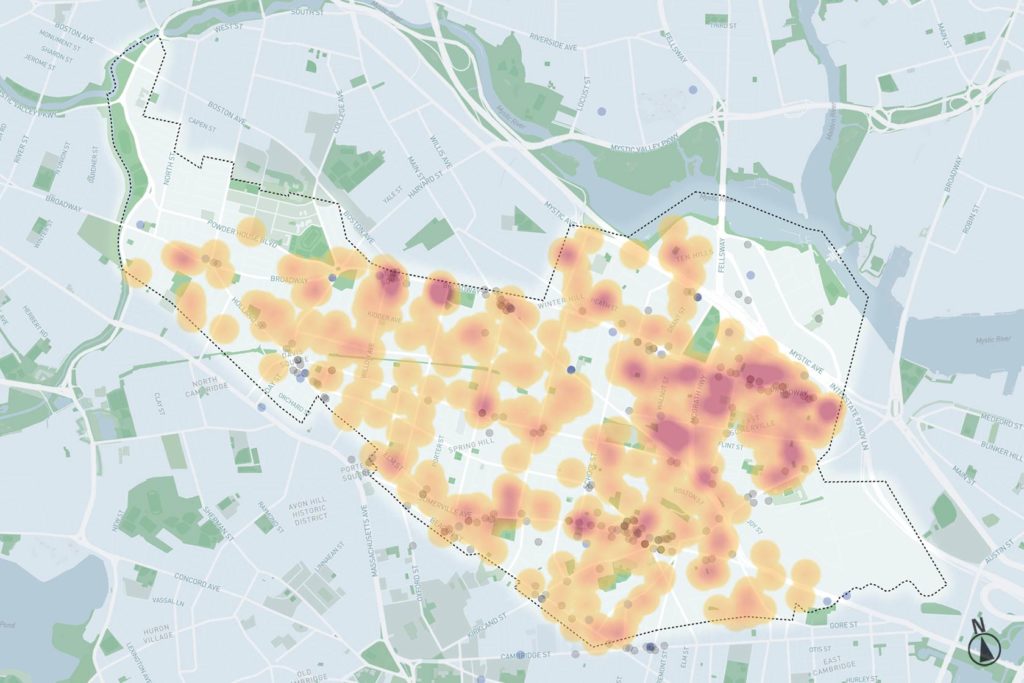 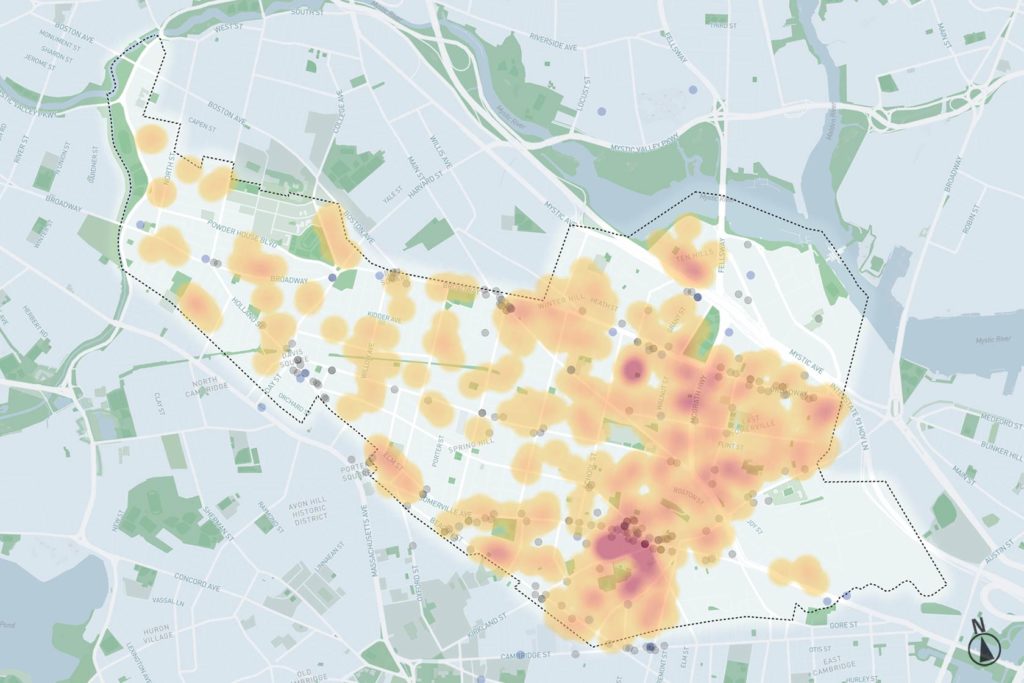 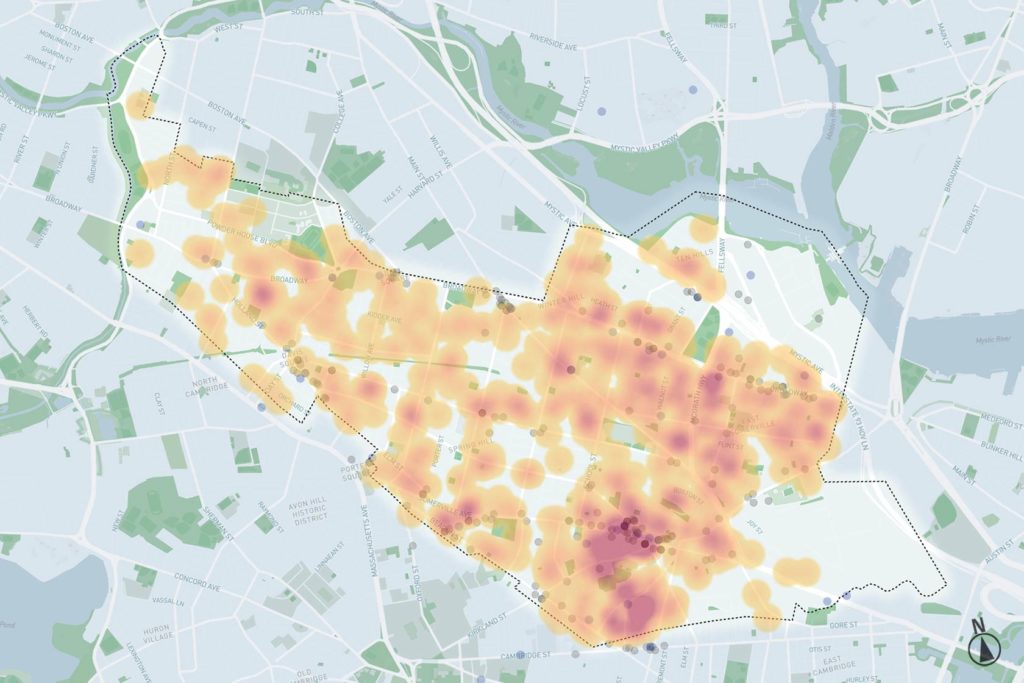 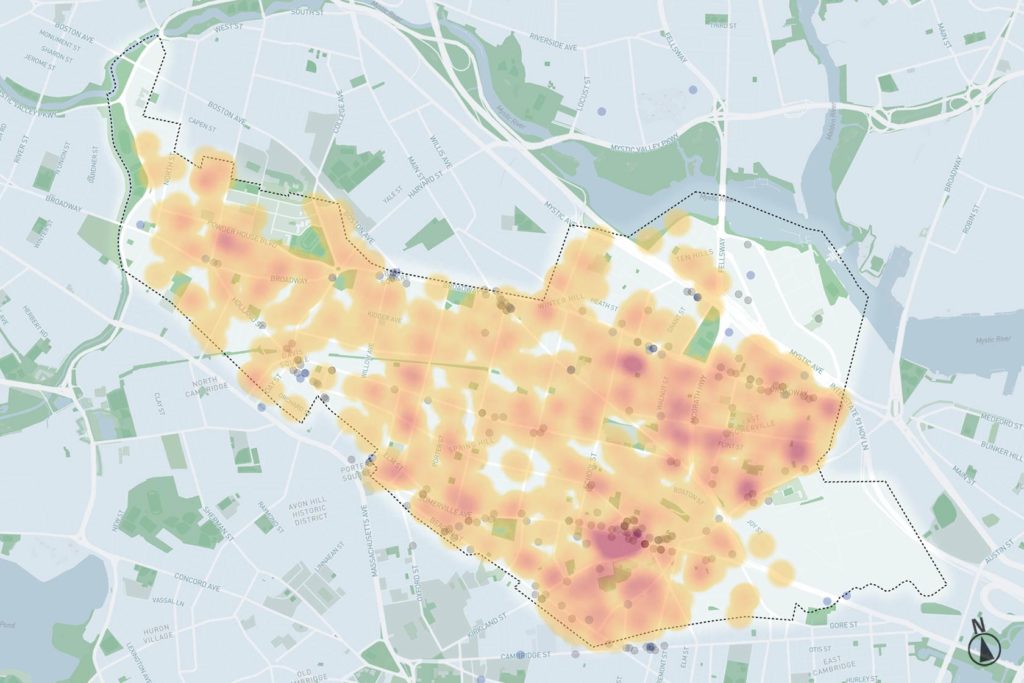 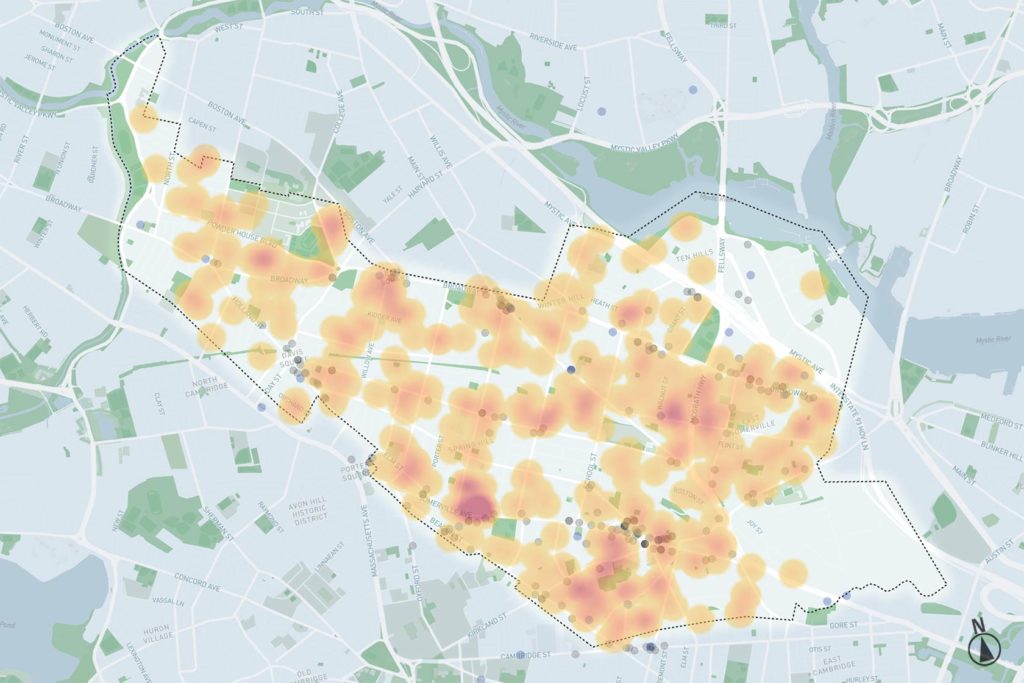 The Rat Problem
Rat Hotspots, Before and After COVID
The Restaurant Hypothesis
Are there actually more Rats?
Why I’m Wrong: Rat Experts Weigh In
Does Killing Rats Help?
Realistic Objectives for Rat Control

One of the topics of discussion amongst civic minded residents in Somerville is all the rat sightings, often attributed to the COVID lockdown. If you ask most people in Somerville, they will report seeing more rats than ever before, and they will attribute this increase to different causes. One hypothesis is that with restaurants closing due to the COVID lockdown, rats who fed on restaurant dumpsters were forced to move into neighborhoods and feed on residential trash. Others will attribute the rats to construction projects, or other causes.

To help examine these hypothesis, I used a the city’s database of 311 complaints. At first glance, this seems like a great data set to help test the validity of these claims, or to otherwise find useful patterns in rat activity. The database contains many thousands of complaints about rats specifically, and goes back to 2015, which allows us to contrast the situation before and after the COVID lockdown.

Each entry in the database is an individual complaint, with anonymized location data, a complaint category, and the time the complaint was received by the city.

To help visualize this data, I used ParseHub to scrape online business listings to create a comprehensive database of all restaurants and grocery stores in Somerville. I then used geocod.io to convert these addresses into latitude/longitude. I then imported the restaurant locations into a map layer on mapbox, which was then imported into Tableau to create the maps seen here.

# Rat Hotspots, Before and After COVID 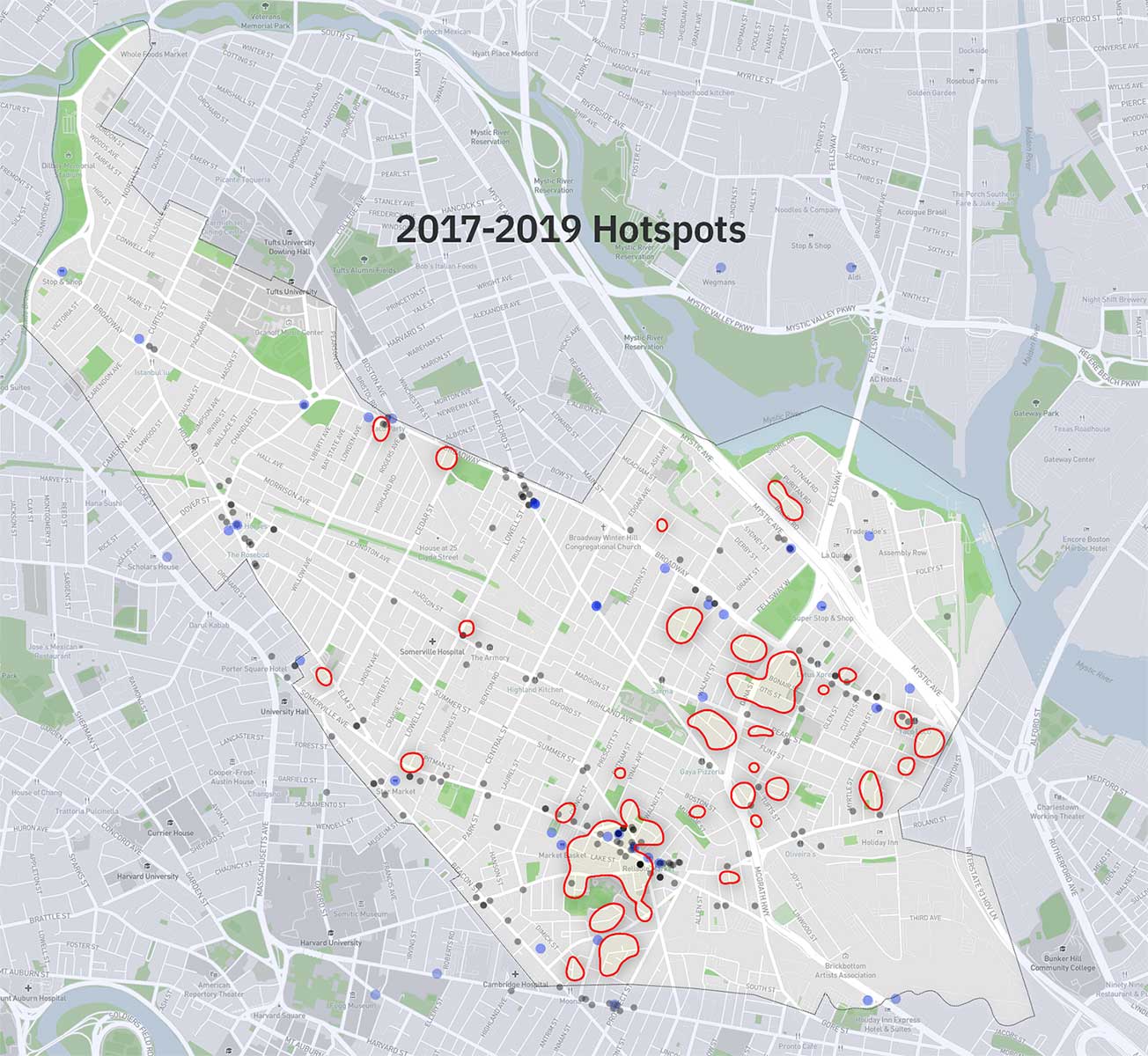 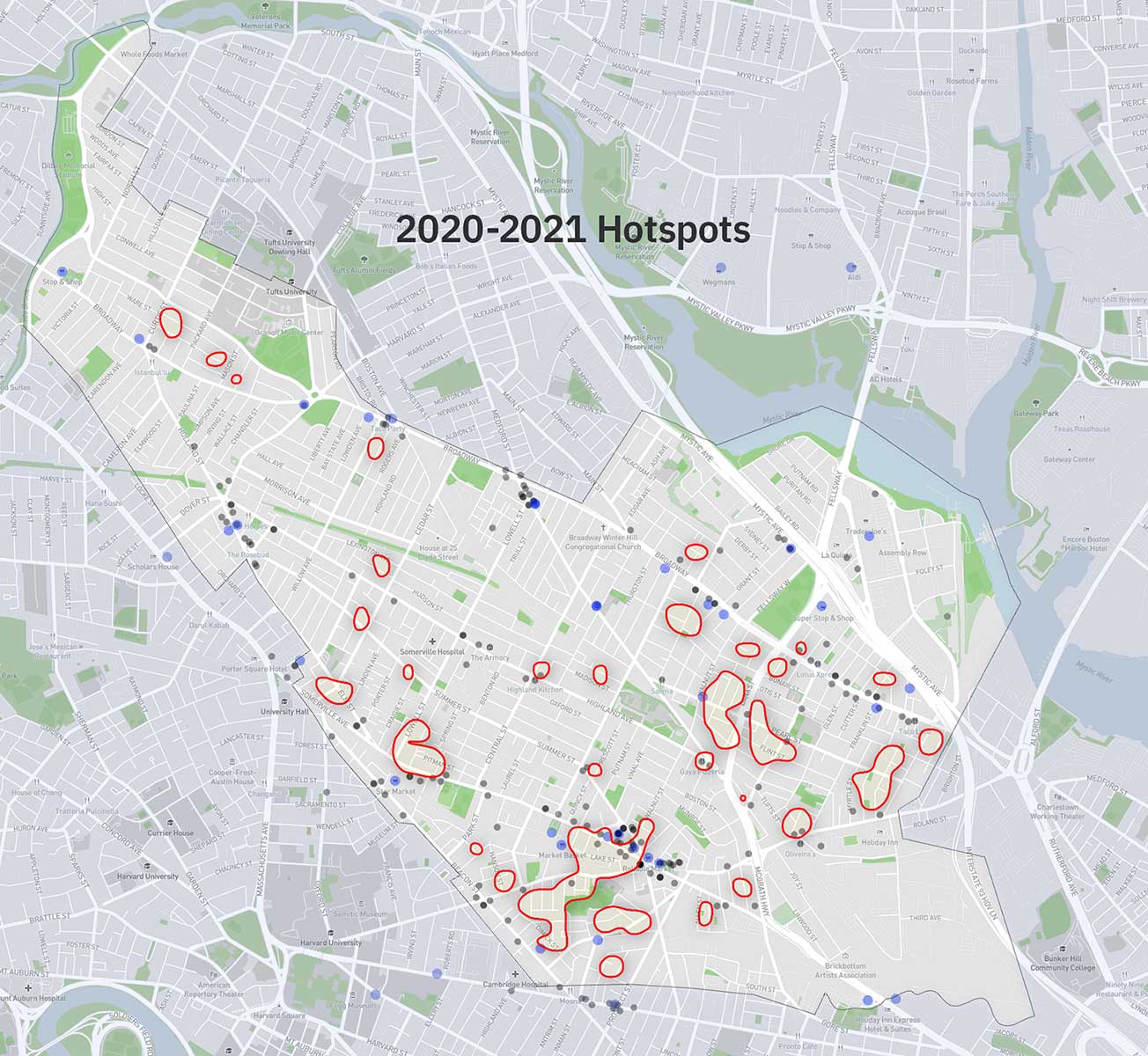 These maps allow you to compare the areas with many rat complaints, in the time periods immediately before and after the COVID lockdown was initiated.

By moving the slider left and right, you can compare the density of rat complaints and see areas where rat complaints subsided or increased. The blue and black dots represent grocery stores and restaurants respectively.

One hypothesis for the increased rat sightings is that restaurants shut down, so the rats which were feeding on restaurant dumpsters were forced to find food in nearby neighborhoods instead. However, my visualizations do not support this hypothesis.

If we look at the data for 2020 (which was spent mostly in lockdown) we can see that this pattern is unchanged. There is still a cluster of complaints near Union but few complaints near Davis Square.

While this data is hardly conclusive, I believe it is reasonable to say that restaurant closures did not drive rats from one area to another. I would offer two reasons why.

First, the number of restaurants which completely ceased operations is small. Taking a random sampling of 21 food based businesses, such as restaurants, caterers, ice cream parlors and bakeries, I found that 17 offered delivery options. Conservatively speaking, I would estimate that 85% of food based businesses continued operating in some capacity, with mostly fine dining and catering businesses being most affected.

Second, although restaurants in Somerville are generally located on about three large streets, all of these locations are thickly settled with residences. Somerville is fairly homogeneous with regards to density, and so it is very difficult to attribute a rat population to restaurant food supplies or residential food supplies, since both are found in the same neighborhoods.

# Are the Rats an Illusion?

Another possibility worth considering is that Rat populations have not changed dramatically. This makes sense, given that the three factors which impact rat populations (food, water and shelter) have not changed. The urban landscape, plant life and cozy nooks for rats to live in haven’t been upended by COVID, and there are still just as many humans eating (and throwing away) the large amounts of food.

To test this hypothesis, I examined the total number of rat complaints compared to other complaint types.

The data does show that there has been a steady increase in the proportion of 311 calls about rats. If we examine a graph showing rat complaint volume against the top complaint categories, we can see that the summer of 2020 had the greatest proportion of rat complaints since the city started collecting data.

To help assist my analysis, I contacted Bobby Corrigan. Bobby holds a PhD in Urban Rodentology, and has operated a pest management consulting firm since 1997, serving clients around the country.

Bobby was kind enough to examine the maps and notes I had made, and answer a few questions about the conclusions which can and cannot be drawn from this kind of data. I will summarize his responses below.

Problems with 311 Data
311 data consists of anonymized complaints which are geo-located. Since the name of the complainant is not provided, and their location is generalized to a latitude/longitude, it is hard to know if a series of 311 complaints from the same area reflect several complainants, or one complainant who is ‘keeping the pressure’ on the city by calling every time a rat is seen.

311 data is not designed with biostatistics in mind, so the information collected is not very detailed. To track rat populations, you need to know much more about the rats besides where they might have appeared to an onlooker.

Determining a rat Population
Rat populations are limited by three main factors: access to food, harborage, and fresh water. Since rats can attain each of these three requirements in so many different ways in an urban setting, it is very difficult to track their population dynamics. For example, an area with plentiful food may not actually sustain a rat population if there are limited places for the rats to live. Similarly, a location with no fresh water will not be able to sustain rat life.

As a result, simply examining one factor (rat food sources, as in the case of restaurant dumpsters) will not explain changes in population. It could be, for example, that there was ample food already, but there was in increase in rat-friendly dwellings in that location. A good example of this kind of change in rat harborage might be construction projects, especially those which replace the old brick sewer lines which are all over Somerville.

“Rat Cities”
These sewer lines can support enormous rat populations, but are rarely addressed in efforts to control rat populations, since replacement is so expensive. Another example where rats can live are abandoned buildings. With new development, old accessory structures can sometimes remain, which creates places for rats to live. Rats will create ‘rat cities’ in abandoned buildings and lateral sewer lines.

Bobby Corrigan says that without addressing these ‘rat cities’, there is little hope for population control, stating:

“These subsurface rat colonies are constantly replenishing  the surface rats that have been exterminated by professional exterminators. (Like growing a corn crop; we plant, harvest,  and replant the corn all over again following year). We do the same with sub-surface rats populations.”

More rats, or more noticeable rats?
Since more people spent more time at home during the COVID lockdown, I suspected that the increase in rat sightings could be explained at least in part by the rats being noticed more, and not simply because there are more rats. However, Bobby points out that rats tend to come out of their homes in the evening and early morning – the same times that many people are home, leaving their house, or returning home from work.

Improving 311 Data Quality:
It should be clear that 311 data is only slightly more useful than anecdote to truly characterize the change in rat population. However, it can be improved by asking the following questions:

However, even without these further questions, Corrigan notes that 311 data can still be useful. For example, many calls from the same area over a prolonged period may indicate a true established rat presence. Many complaints from different constituents from the same 6 block area over several months may also indicate a substantial rat presence. These areas should then be examined carefully by someone who can determine where the rats are getting their food, where they are getting fresh water, and where they are living. It is only by addressing these environmental factors that rat populations will decline.

As I learned more about rats I was struck by how resilient and adaptable these creatures are. Their resilience is due in large part to the rate at which they breed. According to zoologists at the University of Michigan, the female Norway rat can give birth to seven times a year, and are able to breed only 18 hours after giving birth. The rat pups have a gestation time of approximately 24 days, and the litter is generally around 8 individuals. These new female rats will reach sexual maturity after 4 months. According to Rentokil, a pest control company, a single pair of rats can create a a population of 1,250 individuals within the space of one year, if the environment can support them.

It stands to reason, then, that food supplies should be limited to control rat populations. However, rats don’t require much food to survive:

According to RTS, a waste management company in Boston, Americans waste an average of 219 pounds of food a year. Given Somerville’s population of 80,000 residents, this means that food waste in the city can support something of the order of 4,800 rat families annually. Note that this does not take into account other food sources, such as pet food, insects, leather, feces, animal carcasses, other rats, soap, grass seed, fallen fruits and fur.

Given the exponential growth that rat populations are capable of, it is clear that reducing environmental support for them is far more effective than exterminating individuals.

The reason for this is that when rats die, more resources become available (food, water, space.) The colonies will optimistically breed new rats very quickly, and when their current environment runs out of of available resources for survival, these young rats will explore nearby areas and create new infestations.

Natural Predators
Many people believe that natural predators can be used for rat control. After all, these predators work in the wild – rat populations in undeveloped areas do not increase exponentially year after year. However, when humans clear and develop an area, they destroy the resources needed for natural predators to live. A city is not a hospitable place for hawks, owls, foxes, skunks, raccoons and feral cats. As a result, natural predators are not an effective means for population control in urban areas.

In my conversations with Corrigan, he encouraged me not to think of a solution to the rat problem being a matter of population control, but what he terms ‘aesthetic thresholds’. These thresholds vary based on the place and the expectations of the community. One might not be horrified to see a few rats in a park at sundown, but seeing even one rat in a hospital or restaurant would be a serious cause for concern.

It is easy to be pessimistic about the chances of Somerville becoming a ‘rat free’ city. The miles of old sewers and garden spaces provide enormous spaces for the rats to live. Replacement of this infrastructure is extremely invasive and expensive. Rats will always have nice places to stay in Somerville – they are just as happy in a well maintained garden as they are under a sheet of plywood in a construction site. In addition, our climate guarantees good access to fresh water in the form of rain. This leaves the restriction of food supplies as our best hope for rat control.